The burst of new ideas about self sustaining, complex, hierarchal organization collected and named General Systems Theory by  L Von Bertalanffy,  and then added to by K Boulding, WR Ashby, Forrester, Miller and many others became a major 'underground' intellectual movement of the 50's-80's, which spun off many variations and then apparently lost it's social and intellectual cohesion, for natural causes as mysterious as its central subject.   In many ways it was a high level experience of discovering the secret of life and then getting confused by the details.   It had deep relevance to the unanswered questions of many other fields, but absent a core discipline that never developed, every field redefined the idea in its own terms, and it got lost.    I took a lot from it myself.   Historically it was also only one of several deep conversations about the form of nature which flourished world-wide in the last 50 years, proved daunting, and have now been perhaps temporarily put aside, sometimes for the easier enticements of the marketplace sometimes just as passing fads.   Hard to say.   There may still be much good work being done, as on these pages, but the conversation seems to have moved on.   There was both something marvelous gained, and a clear sense of something lost. 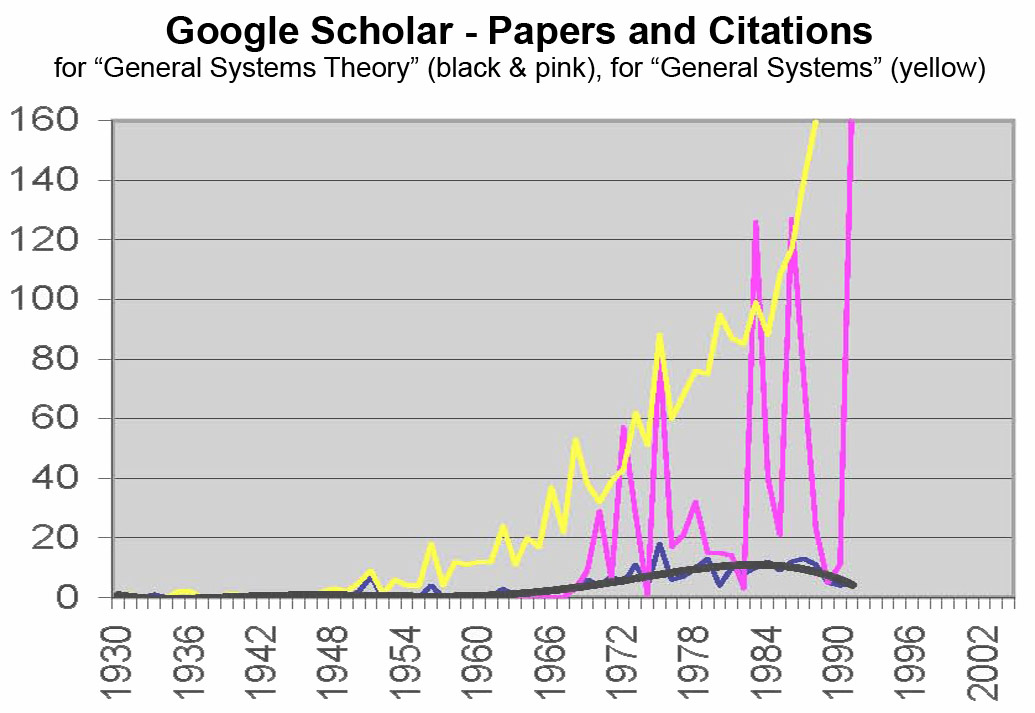 A good PhD thesis was written on the subject, Exploring the Genealogy of Systems Thinking.   A loose list of scientific and philosophic contributions to GST can be found at Repository of IIGSS,  including the work and links between Gregory Bateson, Jay Forrester , R. Ackoff, Stafford Beer, Wendell Berry, David Bohm and many others.   A Genealogy map project of the IIGSS, apparently begun by Don McNeill, shows systems thinking links in history.

The above chart is one of three I made showing the results of bibliography searches on Google Scholar for papers and citations relating to GST.   The yellow line is the number of papers referring to "general systems", the blue the count of those seeming to me to refer to the original idea of GST, the purple the number of later citations from others back to those papers, and the black line a 6th degree polynomial fit to the blue.    If you look close, the exciting time was in the 50's & 60's when there was no movement and the papers came in little flurries, then came the major wave of interest with a series of big citation peaks on top of a leveling and then decline of original papers.   If you look into where those citation peaks came from, much is things like 'family therapy' and 'business management'.    Whether this is significant or not is unclear since any fringe movement gaining wider recognition may be confused with bursts of recognition in the wider culture.

The reason this trace stops in 1991 is that the effort of reading the citations exceeded the time available (it was easier for the years with only a few).    This study is actually just a quick test of method.   Word searches are a very crude, if neutral, way to tell the story, and Google is a source that now largely includes only the wide circulation publications.   More complete access to the published record and better word association searches are needed.   The data I collected and some notes is available in PDF and XLS files.  The fully labeled charts are available as GSTfig-lin.pdf and GSTfig-log.pdf with the latter plotted to a log scale tracing the total number of Google's citations by year along with counts for references using "systems" "general systems" "general systems theory" and to "general systems" with a particular GST topic.