Our use of efficiency is for making us more productive.
If we understood just that, it would remove all the confusion.

(quoting from my 3/23 edit of the Wikipedia page)

The Jevons Paradox has been used to argue that energy conservation is futile, as increased efficiency generally stimulates other energy uses for a net increase. However, this ignores other benefits from increased efficiency, such as increased quality of life. A broad assessment of benefits and liabilities is actually needed. A global green tax might directly restrain energy use as it stimulates improved efficiency, for example, without just driving energy using businesses to low tax countries. Efficiency without growth would also extend resources briefly while the adaptation to sustainable alternatives takes place.

The mental error most frequently made is to not combine the savings of being more efficient with the expanded footprints of business and economic activity that efficiencies allow and are often the motivation to start with. To leverage large returns from small efforts small water conservation measures might be found to allow increased regional development, for example. In the end that only increases the number of users and the scale of development with the pressure on the resource remaining the same. All aspects of how new methods alter their environment need to be considered.

The economic stimulus effect Jevons first observed might not occur if efficiency improvements were uneconomic, or if they also reduced the level of incomes people needed to live as comfortably. Whether that would result in declining resource footprints while improving the quality of life generally faces the same questions. Can you discover how to do it and will the new resource potentials created that way just provide stimulus for business to create growing uses as usual?

Notes on my Oct 17, 2009 Talk to Charlie Hall's Biophysical Economics meeting.    The notes don't exactly following the slides.  The talk was to systems ecologists, on efficiency in relation to the ecology of economic systems.   If listening to the audio the first slide discussed is #14 and then back to the beginning.  As time runs short the later slides for raising related subjects are only mentioned quickly.

(a)   neglects the complex development processes, by which they work.

(b)  neglects their limits and possibilities,

(2)  how to search for the great gaps in our models

(b)   opportunistic learning processes that occur only once

b)     Start from what’s naturally missing in the typical “S” curve of development.  What’s missing is the system’s environmental learning process. Slide 14

(1)  Make note of clear switch in kind and direction of learning at inflection point!!

(2)  from multiplying returns to dividing returns

2.      The data shows impacts growing faster than efficiency, as parts of a system working as a  whole.

a)     The popular assumption is that they should go in opposite directions, but they don’t

(1)  Efficiency building codes, creative innovation strategies, all seem to have the opposite of intended effect.

b)     Economists have understood this all along, but it’s mysterious why working with sustainability planners for years and years they don’t mention that both groups are using the same solution for opposite effects.

c)     From inside a learning system, each part learns two things, how to reduce their effort and how to provide more service.

(1)  Efficiency as a measure of the “work it takes”

(2)  Productivity as the same thing, but considered as the “service it provides”

a)     What really steers the direction of whole system development is what the surplus generated by that learning is used for, with two main choices

b)     Efficiency can accelerate either,… so efficiency is more like “the gas” and does not work like a steering wheel

(1)  Multiplying change is not a natural fixed state except in imagination, and nearly all discussion in our culture treats it as such.

(3)  financial information model represents multiplying change as a constant, but accumulates misinformation after the inflection point  ~ 1960

1.      Efficiencies that save money or resources create savings that get used for other things.  We tend to count the subtractions but not the additions…

a.      Saved money and energy are like “printing money” and “creating energy” not previously available, and often used for leveraging other things

b.      Say, a 10 year payback on insulating your house, uses resources to saves and create resources that didn’t exist before… having a positive EROI

i.      First you have the added energy use and other impacts of the work

ii.      You also free up energy as a resource for others to use for powering other uses with various impacts,

iii.      After the 10 years you have what amounts to a new source of income for spending on other entirely new resource uses yourself,

iv.      You’ve also given the bank a profit, maybe equal to half of the cost of the work,  for it to use in multiplying more investments…

v.      the reduced impact you counted is probably equaled by (i & ii) and exceeded by (iii & iv), thus the growth effect.

c.       When adding up impacts of spending we may count only what we see, and miss the hidden impacts of the whole system that delivered the goods.

i.      we add up the impacts of the physical processes by which things are made, and ignore the usually larger hidden impacts of:

1)      the employee, business operation and finance costs and impacts

3.      Creating efficiencies does determine what other people will use them for

a.       Saving water where that was a supply barrier to development, invites development, expanded urban infrastructure and demand on all resources.

4.      "Do more with less" is what people want and but also and ever steeper climb

a.       Matching the efficiencies of competitors is needed to keep investors.

b.      With unlimited resources it has the effect of sharing ways to have more

c.       With limited resources the effect is sharing ways to take more from others.

5.      Efficiencies are a limited resource that gets ever more expensive,

a.       Finding ever greater efficiencies is a non-renewable resource, with the same depletion points of vanishing return as diminishing EROI resources.  You can plan on their becoming too expensive to use.

b.      2nd law efficiency limits for technologies and whole systems may only be seen in diminishing returns on investment for no other apparent cause.

6.      Efficiency has two faces, like Jekyll and Hyde, benefits that become real dangers, like relying on increasing use of specialization or monocultures.

a.       Increasing control is decreasing tolerance.  It leads to loosing control due to complications that more tolerant designs can overlook.

b.      Environmental adaption benefits from complex diversity.  Uniformity reduces options, adds to inflexibility and instability in response to change.

a.       Computers treat complex questions as “garbage in” to result in “garbage out”.

b.    Nature’s way of computing is wasteful in every step, but takes “garbage in” and produces “fruit and vegetables out” or “garbage in” with “art and music out” using physical system complexity as its tool.

c.    The ability to sort out undefined complexities to select what problem needs to be solved, that computers can't do at all, seems to be an important efficiency too. 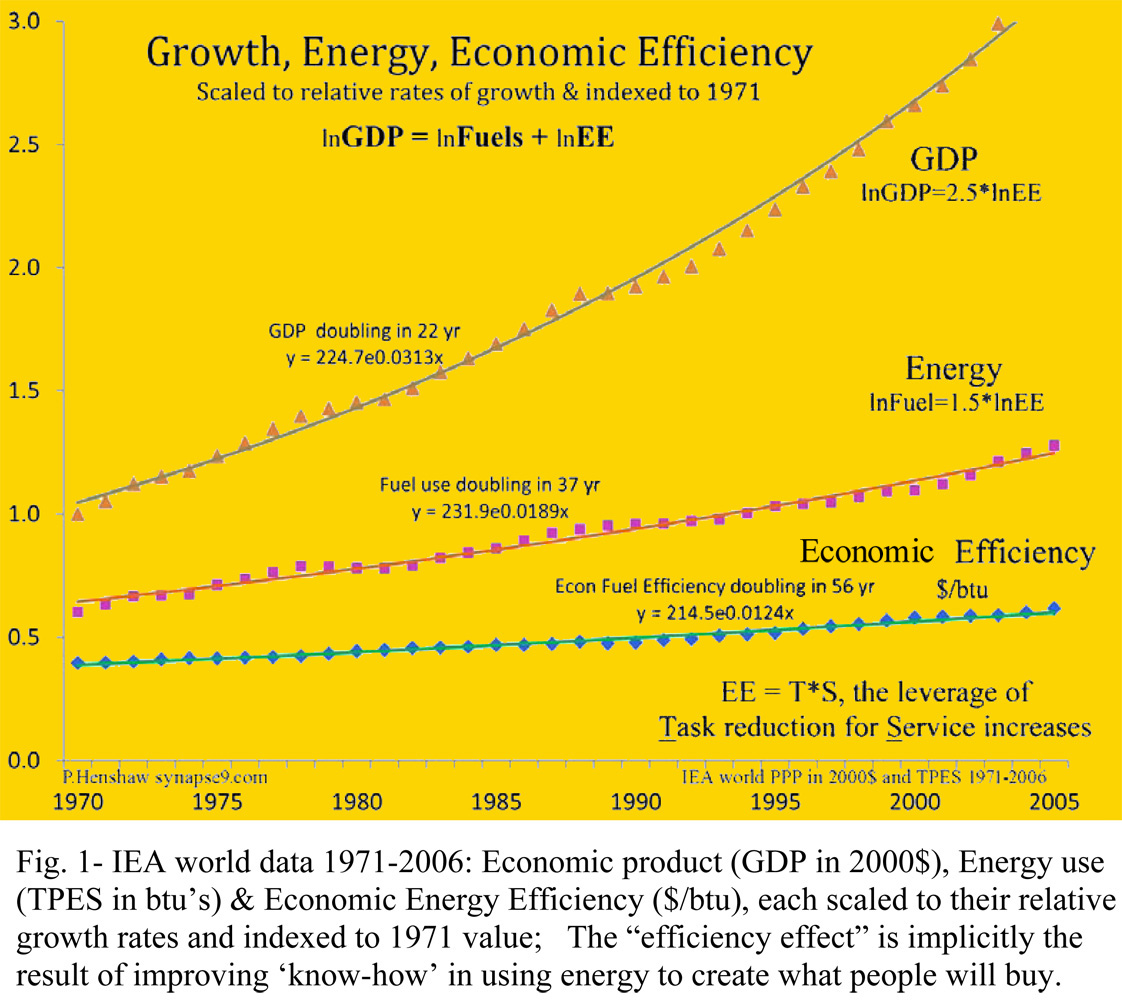 It's 150 year old established science, actually.   Why we use efficiencies is to simplify our tasks and become more affluent.   Our main purpose in improving organization and being more efficient with our tasks, often with improved technology, is to increase our productivity.   That's a growth stimulus.    That makes using it as a strategy for reducing impacts completely self-defeating.   Over a century ago Stanley Jevons noticed the effect in England when improving steam engines to use less coal accelerated the consumption of coal, not the reverse.   The added utility and growth stimulus of improved technology, and so the productivity of the people using it, increased the use of the resources it was intended to conserve.

It was called "Jevons' paradox" because it is counter intuitive.   It's been widely discussed too.  People have simply not applied it to correcting our wishful thinking when it comes to saving the planet from our overconsumption...    Though long recognized by many scientists, even other scientist don't take it to heart, so it's been completely ignored in the public advocacy for sustainability by educators, activists, media and government in organizing, planning and research.    That's trouble!   It happened partly because people normally think by snap judgments, and "go with their intuition".   Here our intuition is dead wrong.    Somehow even modern economists have just never seemed to mention that as a strategy for impact reduction it fails entirely.   Someone needs to research the full story of the confusion.   It's both important intellectual history and critical for getting to the bottom of why we let our main solution for relieving our impacts on the earth be a direct multiplier of the very problem it was intended to address.


Sustainability does need efficiency, just not for stimulating even more growth.  It sadly does mean that the central tenet of sustainability that people around the world are now  relying on has the opposite of the intended effect on our environmental.   Look at the language of the proposals.   Even the strategies for climate change to reduce CO2 and other GHG emissions are entirely phrased as plans to improve the efficiency of growth.  Then look at the curve.   It only means money growing faster than impacts.  Ot assures that all our kinds of impacts will keep increasing ever faster too, even if marginally slower than the money someone is making off them.   The only way to stop adding to our impacts is to stop adding to the economy, really.   That means investors accepting their natural fiduciary responsibility for choosing what systems the economy will develop.  They'd need to actually use their profits from investments to no longer undermine the value of our common investment in the earth, and invest in long term sustainability instead.    That's possible, but means that a fundamental change in the design in the economic system is needed to make sustainability physically feasible.