(the start of a new collection)

You could also say it is a crime... that the natural dynamics of social change are not a direct focus of our awareness or the thinking of politicians.   There have been declining core crime rates for at least 30 years, with dramatic eruptions of youth crime lasting several years. top

When the mayor says it is he who is the master of the crime rates, and everyone seems too dumbfounded to say anything, they're all not looking at the graph.   We have had a steadily declining core crime rate since at least 1975, and two patterned eruptions of youth crime.    I use the term 'eruption' because the shape of the two youth crime waves is of something growing until it subsides, with almost no period of leveling off, like a feaver that 'breaks', a frenzy of some kind.    What caused them and where they went is something that has not been discussed very much because we have been ignorant of what was happening.   I am not a sociologist or criminologist, but would venture to guess that they corresponded to youth culture self-delusions and moments of realization.

One of the other interesting, and troubling, things about this pattern is that teen crime was an insignificant part of the 1980 crime wave, but essentially trippled in the 1990's crime wave.   Clearly it would be desirable to look at other statistics and periods of time, and to carefully think through what was happening to each segment of the population.

The right thing for government to do, say when it is noticed that the worst of the feaver is passed, is to congratulate those who are making the change and give them a hand.

2. Collapse of the Crack Epidemic - a study with interviews of the sudden demise of the crime culture of NYC in 1990 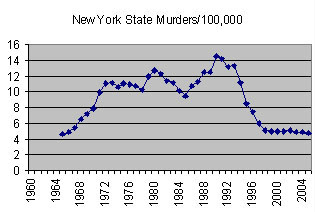 Oct. 2005  Crimewave's birth and collapse  I studied great crack epidemic of the late 80's in some detail, because of its dramatic end.   The linked report is only a summary research note, about the fascinating secret.   The dynamics show a clear true collapse, starting about three years before the reputed influence of Mayor Giuliani.   There's no bend in the curve for Giuliani's mayoralty at all really, reinforcing the idea that it was the cultural change the broke the crime wave that got mayor Giuliani elected,  not the reverse.   Perhaps it sounds a bit speculative, but in fact the great crime wave passed rather abruptly like an intense fever as the whole community of addicts and their families rejected the crime culture in their midst.   It was an abrupt dramatic silence to bring to an end the 30 years of youth violence that began in the 60's with the rage following recognition of civil rights for the black American and Latino communities that resulted in the emergence of major youth crime cultures in all American cities.

So I went out and did a number of  interviews on the streets of Harlem and the Bronx to see if people remembered what it was that happened, finding that 15 years later they only vaguely remembered.   I pieced some of it together, I think, from talking to enough people and having lived in one of the high crime neighborhoods of Manhattan when it broke, and so recalling having watched it first hand.   There may be other scientists who have done so, but I have not read about it. (http://www.synapse9.com/cw/cw_interview_notes_10-22_audio.pdf) The study was not meant to be exhaustive, and but to explore my method with a minimal amount of effort, to see if some better questions would come out of it.


Back to top , Back to Patterns in Time